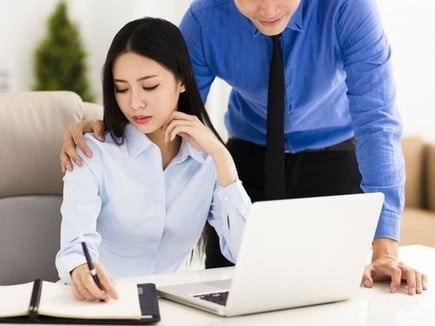 Based on a recent survey, over a third of Malaysian women experienced sexual harassment at workplaces. In most cases, the victims chose to remain silent because of embarrassment, fear of retribution, or thought that speaking out would make no difference.

In this article, we aim to raise awareness on workplace sexual harassment from the law point of view by answering some common questions regarding this issue.

What is Sexual Harassment?

“Any unwanted conduct of a sexual nature, whether verbal, non-verbal, visual, gestural or physical, directed at a person is offensive or humiliating or a threat to his/her well-being, arising out of and in the course of his employment.”

Under the Code, sexual harassment can be categorized into two (2) types:

What are the forms of Sexual Harassment?

Sexual Harassment can take place in various forms. Based on the Code issued by the Ministry of Human Resources, there are 5 possible forms of sexual harassment:-

What can a victim do if he/she is being sexually harassed at the workplace?

If the harassment involves physical molestation, indecent exposure, or physical sexual assault, then those acts may be a criminal offence under the Penal Code. In such circumstances, we advise the victim to immediately lodge a police report at the nearest police station.

What are the employers’ legal responsibilities in handling sexual harassment cases?

Under Malaysian law, employers have a legal obligation to ensure a safe workplace and possess a duty to inquire into allegations of sexual harassment by employees. In one case of Sitt Tatt Bhd v Flora Gnanapragasam & Anor, the High Court held that the company’s management was guilty of dereliction of duty because it did not act on the employee’s complaint on sexual harassment.

Although the law does not set out the investigating procedures for such incidents, the employers are advised to establish an in-house mechanism with a comprehensive policy and a simple complaint procedure to deal with this issue.

Our Recommendation(s) to Employers:

It is always advisable for employers to set up whistleblowing channels to better manage sexual harassment complaints at the workplace.

Can a victim sue for compensation from the harasser?

The short answer is – Yes.  A victim of sexual harassment has the right to sue the harasser under the tort of sexual harassment to obtain compensation. In one Federal Court case in 2016, Mohd Ridzwan Abdul Razak v Asmah Hj Mohd Nor, the employee complained that she was sexually harassed by the Manager. But unfortunately for the poor girl, her complaint was dismissed for lack of sufficient evidence by the Company’s Human Resources Department at the time.

Mercifully, this impediment didn’t deter the strong lady from pursuing her case through legal process. And the Court ultimately agreed with her and found that the harassment committed by the Manager had caused her to suffer from Emotional, and Mental Trauma. The Honourable Court subsequently granted damages to the victim amounting to RM120,000.00. That said, it should be noted that the amount of damages a victim may get in such a situation is very fact-dependent.

Hence, if you find yourself in a potential sexual harassment situation, it is our view that you should immediately file a report with the Human Resources Department, and/or the Police (if physical harassment is involved). In such situations, we want to assure that your safety comes first! We also want to point out that should you file such complaints, your employer cannot ignore or choose to retaliate against you! We are here to fight for you!

Therefore, whilst our C&C family hope that nobody has to ever go through such ordeal, but in the event you have been the victim of sexual harassment, and need an experienced lawyer in workplace harassment, please do not hesitate to contact us today!  If you’re a lady, and you find it more comforting confiding such incidents to a female lawyer, we will assign one for you.

Disclaimer: This article is intended for general informational and education purposes only and not for the purpose of providing legal and professional advice. If you have further issues regarding your workplace rights, please contact us today at info@chernco.com.my, or send us a direct message through our WhatsApp button on the website.

Speak To Our Lawyers
FacebookTwitterLinkedInWhatsAppTelegramCopy
 5/5

INTRODUCTION Jonathan Khaw represented our Client in a successful Eviction proceeding against squatters who had allegedly occupied the Client’s Land for 40 years. The Eviction Proceeding was heard before Justice Jamhirah Binti Ali, who delivered her decision on 16th August 2022 at the Shah Alam High Court, after 2 Court Hearings. The High Court, which